Older Daughter got home on time and saw me cross-eyed on the couch. I told her that I didn’t sleep well. Something snapped me awake a little after midnight and it took a while to go back to sleep. She asked what woke me up. I told her I didn’t know… something. She offered to stay in the living room with Ben, she wasn’t ready to sleep yet. I took that offer.

Ben decided he wanted to go to Mommy’s Room, so they headed that way and I got back in bed. Just as I was dozing off I got Bounced again. Zeus ignored it all and kept snoring. Ben wanted his tablet, which I had plugged into my charger earlier. I traded tablets with him, plugged mine back in, off he went and I tried to get back to that sweet feeling of falling asleep.

Then Ben was at my door yelling “Gramma come living room!”. Okay, swell, FINE! I started to get up and Daughter yelled that she was coming. Make up my mind, would ya?!

Before she could get to the living room, there was a knock on the door. Of course Zeus started barking like the vicious dog he isn’t. Delivery?? Yep. Ben’s juice had arrived early. Amazon really doesnt know when anything will arrive anywhere. So now we have enough juice. At least for two or three weeks.

Isn’t it funny how when you need something and don’t have it, it’s impossible to get. Then when you finally get some, it’s everywhere. Ben’s juice, money, anything really… or does that only happen to me?

Ben jitter jived between the living room and my room until the alarm went off for his 10:30AM meds. I figured if Daughter was still awake, she’d be ready to go to bed, and Ben had been in bed with me for a while, so it was time to quit dozing in and out, and actually get up.

Ben immediately presented me with police cars that needed light bars. Have I mentioned that Ben likes to break things? Anyway, there would be no peace for me until I had completed the assigned task. Tape and markers gathered, I set to work. 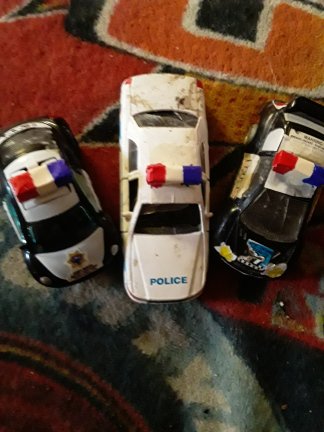 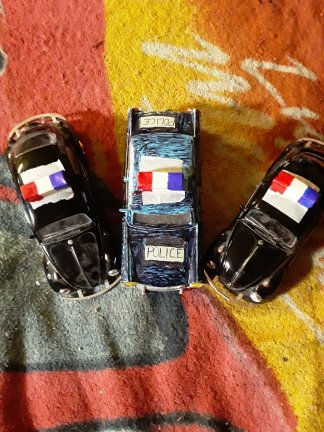 Now it’s noon and I hadn’t checked my email or WordPress. It’s an off day already. I put Sven in the tub for a soak and head to my email. I deleted all the news stuff, I’ll check it later or I won’t. One personal email… I’ll get back to that after Ben is in bed.

For the next couple of hours Ben was pretty mellow. He watched his tablet, arranged the newly light bar equipped police cars

(You can see today’s chalk dust all over the place. I used to try and keep stuff cleaned up all day. It was very frustrating. Now I just wait until Ben is in bed.), ate some snacks and drank his juice. I got through my WordPress reader in between opening juices, scripting with Ben, making a 7th light bar, checking on Sven and eventually putting him back in his terrarium with food (which he ate), and getting a refill of coffee.

Zeus, having scored the often fought over spot on the couch next to me, snored away the entire time. He’d crack an eye whenever I got up, but he could see me (except  when I used the bathroom) so he didn’t want to relinquish The Spot.

At 2:30PM Daughter got up and I went to lay down on my bed, followed by Zeus, of course. I spend a LOT of my time horizontally. When I was fighting to get SSDI (federal disability benefits) my attorney asked me what percentage of time I spent laying down during an average day. It was a very validating moment for me. Fibromyalgia is invisible and there aren’t any lab tests or scans that can definitively diagnose it. Having it, I’ve questioned myself and my disability so many times. A judge approved my disability so that should’ve ended the questioning, but I guess never feeling like I was good enough when I was growing up has left it’s mark.

At 4:00PM I hear “Where is your underwear?!” from Daughter to Ben. He doesn’t deign to reply. He had been beboppin all over the house and the backyard, so I’m guessing they were left in the yard. Daughter was in the middle of (finally!) folding her laundry from the other day, so she brought him a new pair. (Why is it a pair of underwear? Hmmm….) She also told me in code that her BFF was coming by with our CostCo pack of TP. We are down to our last two good rolls and three off brand rolls. I stay stocked on some things!

At 4:45PM Daughter started cooking Ben’s dinner. He’s having sauteed chicken breast cubes tonight. He calls it “white chicken” which is different than his TGIFriday’s frozen chicken nuggets which is “orange chicken” because the breading looks a little orangish.

Anyway, she cooked a little early because Ben was a little extra intense. There is another storm on the way, more rain, and the pressure changes have a serious effect on his ADHD. Plus, he usually gets extra hyper in late afternoon/early evening, so add an additional variable and we do whatever we can to keep him from getting himself in trouble.

But I somehow managed. He finished eating and started bebopping again. Daughter was yelling questions at me, she was trying to find somewhere that would deliver or let us pick up some food. We’re getting low on butter and steak and chicken, coffee (NOOOO!) and a few other things. We still have tons of food, just not the main stuff Ben likes. Anyway, it was chaos!!

I got his meds ready and delivered in the midst of answering questions and dealing with Daughter’s frustration. Then I ran his bath and spent 15 minutes trying to get him into the bath. Chaos, noise… and Zeus underfoot because he has to follow me.

By 6:15PM Ben was clean, pajama’d and tucked in bed with Zeus and his tablet. He takes anywhere from 15 minutes to 2 hours to fall asleep. Thankfully with all the meds it’s closer to 15 minutes. Daughter was crying in frustration and fear on the couch. She’s always had problems with control and fear projection. She imagines the worst case scenario and gets her knickers in a twist over what might happen. I try to talk to her, let her know we’ll get by, things will work out… she, like every child (adult or not) doesn’t listen.

Daughter’s BFF didn’t come by before she went to lay down to sleep before work.

Stay healthy everyone, and stay tuned. Who knows what will happen tomorrow, it’s always something…

(The title of this series was Melanie’s idea. I keep forgetting to give her credit)