Another day, another bedquake… Ben tried to snatch my phone instead of asking for my tablet, so that was different. He also demanded “Gramma come living room!” sooner than usual. At least I’m not bored, right?

He played with his chalk and grunted Let’s Go Fly A Kite so I tried to doze. Either his Spidey Sense knew, or I was snoring, because he kept telling me to wake up. No fair!

I had given him his meds and uncovered Sven at the usual time and was in the bathroom when I heard CRASH, BOOM, BAM!! What now?

His ‘jail’ had been brought back in from outside. It appears to be empty and at least it’s not in my room.

Daughter got home from work and told me about her shift. More call outs and a scheduler who puts random names on the daily schedule whether people are supposed to be there or not. I guess it’s plausible deniability in case State Survey questions their serious deficit in nursing hours. Calls were made, staff moved around and Daughter wound up with 30 patients instead of 45. RIDICULOUS!

She went to go lay down and Ben followed. I was thinking, SCORE! Maybe I can catch a few more ZZZZ’s. He was in my face 30 minutes later, “Gramma come living room!” Aww, dang! On the plus side, he was calmer. His meds must have started working.

Daughter came out a little while later to let me know that his teacher had called. They decided that the way they teach Ben and the materials they use can’t be replicated at home. (Yeah, no laminating machine, no stock of velcro… I have tape though) Basically we’re going to work with him on his reading, his handwriting and his ADLs. Also, the closure is officially until April 30th. Sigh…

Ben and Zeus continued to bump, nudge and generally aggravate each other over space on the couch. I felt like saying “Dont make me pull this couch over!” Ben was watching (skipping through) Cars 2 and he got to the end and was watching the credits go by (he has always loved watching the credits) and listening to the music… I had forgotten this song, but it’s a good one

Ben continued to be mellow, play with his chalk, eat his snacks and watch his tablet for the rest of the morning into the afternoon. He had his earbuds in most of the time. It was so quiet… except Zeus snoring in my ear and the ravens squawking outside. Oh, and the ever-present background noise of cars going by on the busy street.

After Sven’s soak I feed him. Today I took (tried to take) pictures of him eating. Maybe a video next time. He is so funny to watch. Bearded Dragons have sticky tongues that they catch their food with. Sven has terrible aim… 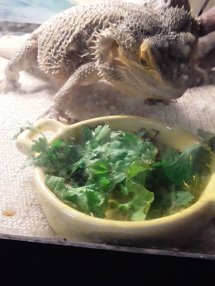 I think he was going for the cricket but got a mouth full of greens instead. I have to put blueberries on the greens to get him to eat them. I usually give him live worms, but that means going out every few days and getting them. Now he’s stuck with dead, preserved crickets in a can. (I know…eewwww). Another picky eater…

Daughter got up at 1:30PM and didn’t bat an eye as she walked past this sight

We just don’t ask. (I love his hair) Daughter took over living room duty and I went to lay down. Ben followed me at first, but I guess the lure of his ‘jail’/cave was too strong and he went back out to the living room. And here I was, having horrible thoughts, earlier when he dragged it in the house, about putting him in ‘jail’. He’s such a little weirdo. Just like his Grandma.

He stayed in the living room and everything was good until about 4:30PM. He and Daughter started butting heads. She can be extremely willful herself. I heard the way things were headed and went out to intervene. His steak was sitting uneaten and they were fighting over her tablet. She was watching some movie and didn’t want him to rewind it, forward it, touch it. Being Ben, he HAD to touch it now. She was getting her angry tone, which always sets him off. True, he needs to leave stuff that doesn’t belong to him alone. But which hill do you want to make your stand on? Ya know?

I got him distracted, got him to eat, got him into the bath and cleaned up the messes he had made. Finally, it was time for bed.

It was a pretty good day. Except for the wee hours between the Bounce and his meds kicking in, Ben was pretty chill with me. I didn’t get any more sleep, but I wasn’t as on edge. Tomorrow morning I see my pain doctor to get my Intrathecal Pain Pump refilled. I’m curious to see if there will be traffic, and I’m excited to get out of the house. I just hope Daughter and Ben don’t have a major problem while I’m gone.