Let’s start this April Fools Day with the greatest prank I have ever witnessed. Set the WABAC Machine to April 1, 1993

Is that not an excellent prank?

Anyway, the Bounce and bedquake were as usual. Ben got up several times to go to the bathroom or grab snacks or whatever, I stayed in bed until I had to get his meds and then got back in bed.

Daughter rolled out (finally) around 7:15AM. Ben followed her into the living room. I stayed in bed and tried to get some more ZZZZs, but it was a doomed effort, Ben kept wandering back into my room.

I gave up on sleep, got coffee and read through my email, answered a couple and went through my blog comments. All in all, a pretty chilled out morning. Daughter decided we should postpone laundry until tomorrow. Whatever, makes no difference to me.

At 11:00AM I changed into my ‘public’ clothes and drove back to Ben’s school to get his meds. Not a lot of cars, but not none either. People are still idjits behind the wheel.

I guess they were looking out for me at the school, (I had Daughter call the Director and tell her I was on the way) because a lady opened a side door, checked who I was (thank you) and handed me the bottle. Easy peasy. I got back in the car, connected the bluetooth and called Daughter to advise Mission Accomplished. I also told her that since I was out, I was gonna do a drive through the Golden Arches. She shocked me by not wanting anything.

Got home, delivered the magic red box that every child loves and in my best ‘entitled Valley Girl’ voice, informed Daughter that “It was SO busy at MAC Donald’s that I had to wait in the drive through line for FIFTEEN minutes! So much for FAST food! Oh Em Gee!”

Daughter responded with “You do realize there is a global pandemic, right?”

I answered, still using the voice, “Nobody consulted ME about some stupid pandemic thing. SO rude! And SO inconvenient! W-T-F?”

Gotta get our laughs where we can, right? Good news in the form of an Amazon delivery 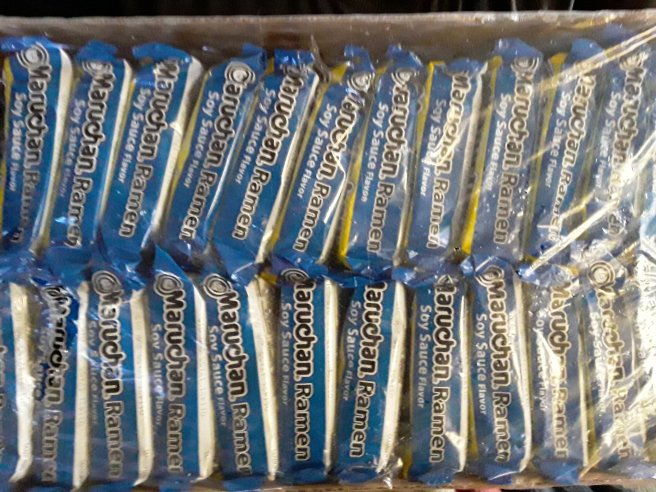 A case of Ben’s ramen. Hoo-ray!

Around 1:00PM, the pendulum swung (swang?) the other way via a call from Younger Daughter. She started back at work today and I had been thinking about her, wondering how it was going. I had told her yesterday to make sure she was early and to assume she had a target on her back. I just had a feeling they were going to be looking for an excuse to fire her. Especially with the way they wouldn’t get back to her about the schedule.

So, yeah, they fired her for “creating a toxic work environment”. If it was even worth the trouble, she could go after these jerks, but it’s not. I told her if there is ever a good time to be out of work, this is it. She’s in the same boat with tons of other people, and unemployment benefits have been extended, the tax credit check or whatever that everyone is supposed to get, and grocery stores are hiring. She’ll find something else. She’s just feeling down about losing her job.

Sven’s soak was later than usual today. When Daughter is off work it throws my routine out of whack. I read posts through my WP reader in between checking to make sure the silly lizard didn’t fall asleep and drown himself.

Ben stayed in the living room with Daughter, hanging out in his ‘jail’. Around 2:00PM she started to get dozy. I told her to go lay down in her room because she was snapping at Ben whenever he asked her questions. He can be a bit intense and annoying, like anyone can, but come on… She, of course, would not hear of going to her room, because I was giving her a (joking) hard time about being tired after her 8 hours of sleep last night when I got less and had been awake longer. Of course she took that as an insult or judgement. Adult children are still children, I swear.

Ben had a mellow afternoon. Maybe he’s settling into the daily groove. The reason doesn’t really matter. I’ll take the mellow Ben over the hyper Ben any time I can get it!

Daughter’s BFF was supposed to coming over to hang out with Daughter and watch a movie. Daughter decided to cook a big meal. She was cooking and watching a Superhero movie (a synchronicity to a recent post from Rory. I hadn’t told Daughter about the post) and not paying attention to Ben, who decided he wanted to play. He kept yelling “Gramma! Gramma! Help Me!” because he’d thrown himself down and needed ‘help’ to get up, or he’d tied his ankles together and they needed to be untied.  So up I’d get from my bed, go into the living room, passing Daughter on the way, and ‘help’ him, as a good peasant should.

She was a half hour late giving him his night meds so everything got pushed back. But it all got done. Bath by me again, as Daughter watched her movie. (Can you hear a little bit of anger or frustration? It’s there. It was there all day.) Daughter’s BFF arrived just as Ben was getting out of the bath. He gave her hugs and kisses before going to bed.

We minimize our risk, but we live, not exist. (thank you brain, I like that one!)

Don’t watch or read too much ‘news’, keep yourself healthy, and please let me know if I can help make things easier for you. Stay tuned for another adventure tomorrow… life is never dull at Casa Cuckoo.