No errands after Ben and Daughter went to bed, so I opened up the house (it was 75° at 7:30) and read a few articles on my phone. The next thing I knew it was 8:45 and I was jittery and confused. I had PTFO and had a weird dream that I made myself exit. I spent the next hour trying to wake up to make sure Daughter got to work at 10:00.

After she was at work, I made myself eat the food I had cooked Tuesday and didn’t eat. I have issues with eating anyway, and when it’s hot, nobody want to eat. I managed to eat my food, I took my sleeping pill and played around on my phone. Around 11:30 I konked out.

And woke up at 1:30, listened… nothing… went back to sleep. And woke up at 3:40, and got up to use the bathroom. I figured Ben would be up soon, might as well enjoy the quiet and the cool. I must have dozed again because I was jolted by the bedquake at 4:30. He was cold and snuggled up to my back for warmth. He kept telling me he wanted to go to the living room and I kept telling him it was too early, the sun wasn’t up yet. Then around 5:30 he said “Gramma? Please please please please go living room please” Dang it! How could I say No to that?

We moved into the living and settled on the couch. He was wiggly jiggly ants in his pants, but not as bad as yesterday. At 6:00 I had to extract myself from between Ben and Zeus and go hide in the bathroom. All the bumping, leaning, squishing movement was starting to irritate me. I only hid for about 15 minutes. Just long enough to calm myself. Plus I was afraid I’d doze off in there.

I uncovered Sven and turned his lights on. He had been laying under the hammock, sleeping. He got up and moved to his rock. I looked at him and had to laugh. It looked like he was giving me the “one finger salute” 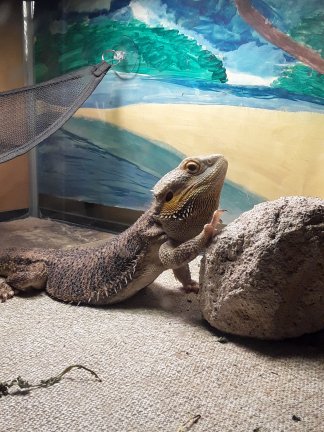 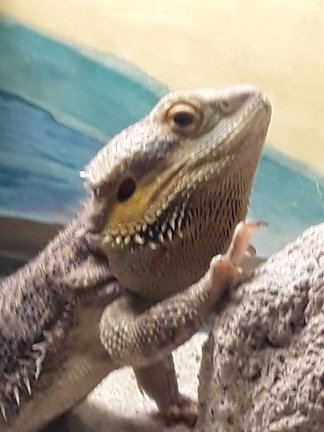 I guess he doesn’t like getting woken up either.

Daughter texted at the usual time, but arrived 5 minutes later. The trainee/former friend of Younger’s had given her a ride home. She came in to say Hello to Ben & me. It’s been 8 or 9 years since I’ve seen her and the last time was NOT ideal circumstances. Zeus was being naughty and jumping up when he wasn’t greeted as quickly as he wanted, by Daughter or the trainee. I think we still had Lucky Dog the last time she was here. Tempus Fugit!

Daughter invited Ben to her room and he went. I went to my room and had just settled when he came and got me to go back to the living room. Dang! Dang! Dang!

Daughter texted me that she was ordering food. She said she was hormonal and wanted salt and grease. I texted back that I didn’t want anything.

When I heard the knock at the door, I jerked and started getting up to get the key before I realized that Daughter was standing right there. I had dozed off again. She collected her food and went back to her room to eat and pass out in a food coma.

Things were calmer all morning than they were yesterday. Ben just played with his chalk or watched his tablet. He even stayed in his jammies. No stomp stomp stomping with hard soled shoes, not even a jacket and tie. Calm is good! Zeus, as usual, snored on the couch next to me. When he wasn’t barking at deliveries, the mail carrier or the neighbors, that is.

10:30 came and went, marked only by the med alarm and the taking of the meds.

Around noon I figured I’d better feed Sven. He was still on his rock but he does need fresh food every day. I mixed the cilantro with the arugula Younger had given me, added a few blueberries and 2 fat blackberries. I tried to get pictures of him eating but got the stare again. 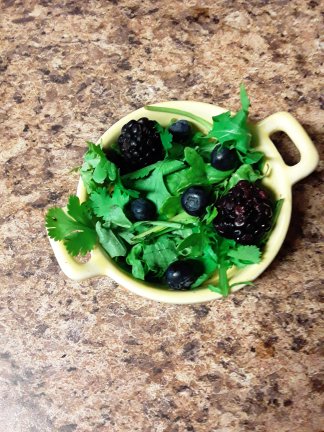 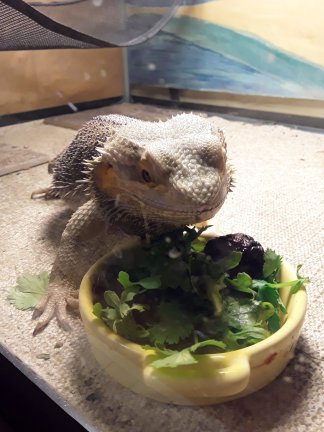 He ate one of the blackberries. We’ll see if it agrees with him or not. After he ate he went to his “judgey corner”. He stared at me for a few minutes, then went back to his rock.

All the calmness of the morning suddenly evaporated. One minute everything was calm and relaxed, then BOOM! Mr Crackerjack took over. Ben started pacing and playing Bongos on Zeus.  He got one of his guns and went looking for darts. He started out shooting at Superdog, but then wanted to shoot Zeus. He went and got the stuffed unicorn that we gave to Zeus and started smacking Zeus in the face with the stuffed animal. I tell Ben to be nice, to play nice, but Zeus isn’t yelping, crying or even moving away. Honestly, the Big Dumb Dog could get up and walk away any time. I’m thinking I should just save my breath. Let Ben work off some energy. Zeus has a pretty cushy life.

Daughter came out at 1:00 to use the bathroom. Then she went to lay back down. She came out about 20 minutes later saying she couldn’t sleep. No problem. I’d been wanting to lay down for hours. I started to tell her about Ben and Zeus and realized it wasn’t necessary, Zeus would follow me.

As I assumed, Zeus followed me and Ben, carrying the unicorn, followed Zeus. The action continued on my bed. Bedquakes aplenty. Ben kept getting more and more amped up. I tried to get him to settle for a minute, tried to get him to calm down, but I don’t know if he couldn’t hear me, if the words weren’t registering or if he was just unable to stop. I just don’t know.

He got tired of hitting Zeus with the unicorn and went after my stuffed Eeyore sitting on top of my dresser. In the process of knocking Eeyore off the dresser he knocked a bunch of other stuff off too. I shouted “Boo Boo Love!” (one of his many nicknames) and I guess he heard that I was getting fed up cuz he started pulling at my hoodies. He got them off the hook and onto the floor. Then he ran into the living room to kick the front door.

Daughter got him away from the door and I heard a crash. I’m not sure what he knocked over but Daughter was cleaning it up. He ran back into my room and screamed “Go to the store, NOW!!”  It was almost the point of no return. He wasn’t making the whining sounds that accompany a full meltdown, but it was getting there.

At 2:00 Daughter was getting his meds ready while I was trying to silly talk him into distraction. Trying to get his thinking to jump the track it was on. It was 85° outside, no breeze and no fan in my room or the living room. The AC unit we bought for the living room was in the shed. So it was hot, his meds were due and his ADHD was spinning him out of control.

He got tired of me and went and kicked on the front door enough to get the dead bolt to jiggle loose, he opened the door. I was standing right there and nudged past him to grab the box on the doorstep and the mail in the mailbox. There were two things we’d ordered for him. I decided to open the big box of 54 colors of sidewalk chalk. Daughter gave him his meds while I was opening the box. I asked him if he could sit down, he did. I gave him a juice and asked if he wanted a snack. He asked for popcorn so I got it. I talked to him about the colors of the chalk, the “tie-dye” ones and the sparkly ones with glitter in them. He got interested and sat down on the floor by the bucket I’d put them in.

Daughter asked him if he wanted to play with the chalk in her room. She has the portable AC in her room, he agreed and we began carrying things into Daughter’s room.  He wanted to bring more than just his new chalk.

We got all the stuff he wanted and they closed the door. She texted me a little while later to let me know they were doing okay. He was calming down, watching his tablet and eating popcorn. We both felt relief over the meltdown being averted.

I was laying on my bed, my back enjoying horizontal time and messing around on my phone. It all caught up with me… all the exhaustion, the tensed muscles relaxing with relief, the heat… I was reading an article, then POOF I was Out. I surfaced briefly once when Daughter went to the kitchen for something, then I was out again.

At 4:15 Ben was in my face telling me “Gramma come living room” I stumbled cross eyed into the living room and fell onto the couch. Daughter came out and convinced him to go back to her room. I went back to mine. 10-15 minutes later I heard her door open and the sound of Ben’s pounding feet coming down the hall. “Gramma come living room with me” was said as he passed. I got back up and went back to the couch. Ben sat and played with his old chalk, his new chalk still in Daughter’s room.

Dinner, bath and bedtime are nearing. The sun is lower in the west and its cooling off. I think, I hope, the rest of the evening will be okay. We’ve got a few more hot days to get through and then the entire summer. We’re waiting to give him the extra half of adderall until we get the new prescription in the mail, don’t want to run out. We’ll be pulling the big AC unit out of the shed and figuring out how to brace it up in the window. Ben doesn’t do well in heat. I don’t do well in heat. Even Sven can get too hot. 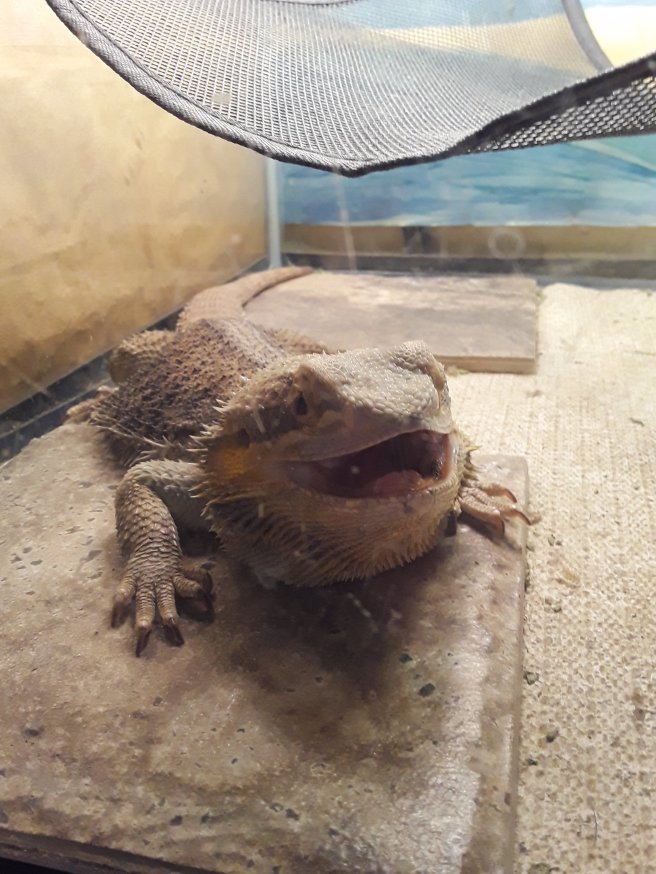 It looks like an adorable smile, but he’s just regulating his body temperature. It’s called gaping. It still looks like a Happy Sven either way. Much better than the way he was telling me that I’m “Number One” earlier.

That’s it from Casa Cuckoo for today. Give yourselves a big hug from me and please do let me know if there’s any way I can make this difficult time any easier for you. Come on by tomorrow, after the Bounce please. The coffee will be on and I’ve got a variety of tea too.