Another night of interrupted sleep. It’s becoming the new normal. The Bounce was at 4:00. Better than 3:00. Ben was doing the wiggle jiggle as usual. It took me a good half hour to get my eyes to focus. I got up to go to the bathroom but Ben jumped up and ran in there first. He wouldn’t actually use the bathroom until Avatar was playing on repeat. Yes, Avatar is still on the TV all day, every day.

I came out of the bathroom to find Ben with Zeus’ unicorn toy and my Eeyore. He was holding them, shooting them with his Nerf gun and throwing them to the ground. He has a room full of stuffed animals, a lot of them have no special meaning, left by Younger Daughter or won in those grabber machines, but he has to use my one Eeyore and Zeus’ toy. I asked him to stop, to get Superdog… he was already amped up and wasn’t listening or couldn’t listen.

I don’t know if it’s just exhaustion, or if it’s the weather or if it’s my sentimentality, but I started crying. Crying over my Eeyore being mistreated. I think my tears surprised Ben. I don’t cry that often. He asked what was wrong, I told him I was sad that he was hurting Eeyore. He picked Eeyore up off the floor and put him on the couch and said “All better”. I told him it wasn’t all better, but thanked him for getting Eeyore from the floor. Ben said “Hugs. Hug Eeyore.” and gave him to me. I was still crying a little as I hugged my Eeyore. Ben considered the matter closed and went back to shooting the unicorn.

Starting a day with tears isn’t ideal. Especially when they’re my tears and everyone around me, including the Big Dumb Dog, depend on my stability to keep them stable. The point to this mini-ramble is that everyone, EVERYONE gets low, gets tired, feels sad, needs to cry… I let my feelings be what they are… most of the time anyway.

6:30 meds were given at 6:23 because he was amped, and I wanted him to begin to chill. Seven minutes early… I’m such a rebel.

Daughter texted that she was getting a ride home from the trainee. I’m sure she appreciates that. Work has been rough and she’s off tonight and tomorrow night.

As soon as she got home we got the AC out of the shed. Of course it was buried under the Christmas stuff, but we got it. I figured out how to prop it up with a dresser that Younger had left and a broken piece of electronics from the “electronics graveyard” in the side yard, aka the junk heap. We seriously need to hire someone to get our yard cleaned up! It’s too much for me and Daughter with Ben and Zeus underfoot and we’ll need it all hauled away too. Ugh! Like Scarlett O’Hara says “I’ll think about that tomorrow.”

After we got the AC in the window, Daughter went to go lay down. Ben was doing his thing with the 54 pieces of chalk and Zeus and I were keeping the couch from floating away by sitting on it.

The meds did their job and Ben was calmer, playing with his chalk and watching one of the Sherlock Holmes movies on the tablet. After a while he took a break for some Oreos. Uh-oh…last of the Oreos. It’s a good thing we have a grocery delivery coming this evening. If it becomes an Oreo Emergency before the delivery, the corner market is less than 100 yards away.

Daughter came out of her room at 9:00 and said she was awake. Duh?? She meant she wasn’t tired, she might as well take over in the Living Room for a while. No argument from me there. As I was gathering my stuff and getting more coffee, I glanced at Sven… 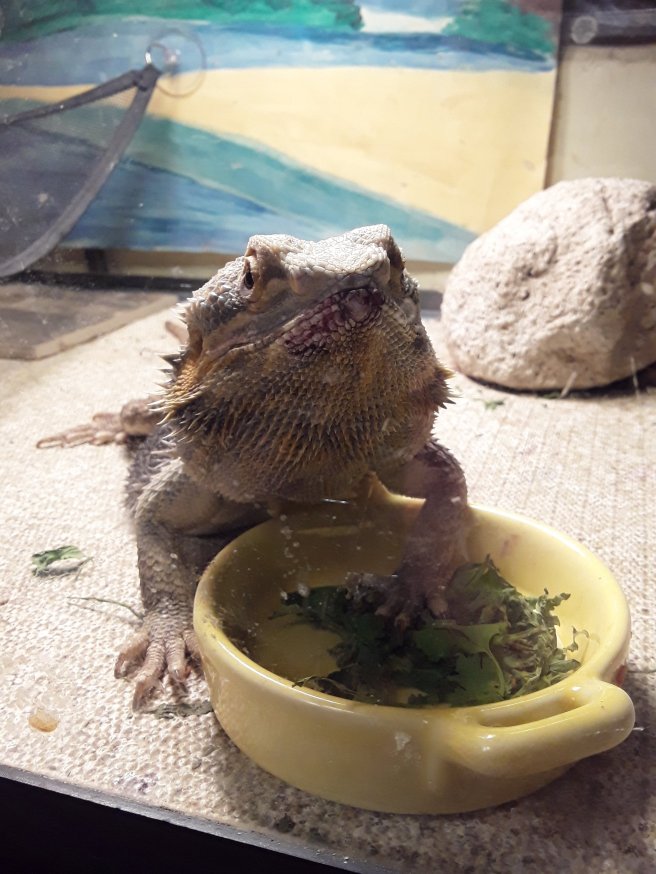 think he’s trying to tell me something? You can also see the traces of yesterday’s blackberries on his chin. Here’s a better look

I told Daughter that I’d do his shower and feed him in a little while. 9:00 is too early.

Off to my room. Horizontal time. Peace and relaxation for 5 whole minutes, followed by a bedquake. Ben decided to join me and Zeus. Ben only stayed for a few minutes. I told him if he was gonna hang out, he had to be still. I guess he didn’t like that.

I dozed until the Big Dumb Dog started barking at deliveries. Thanks for waking me up, you jerk!! I was in the middle of another crazy dream. It was at a familiar place. A place I go to a lot, in my dreams. I’ll have to ponder on it later, when it’s cooler and quiet.

At noon I took pity on Sven. He’d moved from standing in his bowl to his rock. I put him in the shower.

I used the toothbrush to get rid of the blackberry evidence. He didn’t get to bliss out for long. It’s too hot to be running a warm shower.

He went right after the blackberries in his bowl when I put him back in the terrarium. He got one and kept missing the other one. He gave me the stare so I left. A couple minutes later he’s in his Judgey Corner

Maybe he just wanted to cool off? He needs a warm side and a cool side. The window AC we put in blows at that side of the tank, so that tile he’s laying on is probably pretty cool. There’s a lot to learn about reptiles.

All those deliveries that Zeus was barking about?? Good stuff! Ben was playing with some chalk on the floor of my room, so I snuck and opened the door to see what was out there. Two things were for Younger and her partner and two for me. Mine was a box containing a 1 pound box of See’s Truffles and a 1/2 pound box of See’s Truffles. I do love me some See’s! The other package was more masks from my dear friend for Older to take to her co-workers. Very cool! I snagged another one for myself. Daughter has promised pictures when she goes back to work.

Around 1:00 Daughter had McDonalds delivered. Too hot to cook and the goal of the day was a calm, happy Ben. Nothing says “happy” like a Happy Meal! We have noticed that he doesn’t always realize when he’s hungry. “Hangry” is real and that was something we could try to prevent. Just as the food arrived Daughter got a call from one of the hospitals she’d applied to. They scheduled a Skype interview for the 29th. She was so excited that she was crying. I hope it goes well. She really wants to work in a hospital.

And Younger texted me that she has a job interview on Monday. This Nanny job she has is temporary. As soon as the husband returns or the older kids are back in school, the job ends. Of course she won’t leave the Nanny job without making sure the Mom has everything under control. My girls are decent humans.

Older took Ben into her room to have a “lunch date”. Works for me. Some time by myself (well, by myself except Zeus), no bedquakes, catching up on my email, completing a thought… WOW!

At 3:38 the peaceful time ended. Ben threw himself on my bed and and demanded “Gramma come living room now!” Yes, milord. As you command… sheesh!  We went in the living room and he paced and paced and paced. He finally sat down with his tablet and Younger Daughter was at the door, picking up mail. She saw how things were and left. Ben was up pacing again and ran to his room. He came out in long pants, socks, hard shoes, shirt, jacket and tie. He paced some more and paced some more. Then he went looking for his vest. We couldn’t find his vest. Daughter didn’t know where his vest was and started crying when I asked. Okay, overtired daughter…amped out King.

Ben said “You have to get dressed. You have to go to the store.” I told him I couldn’t go to the store but we could look on Amazon. He said “Amazon”. I opened the shopping app (pre installed when I bought the phone. So thoughtful… [too much sarcasm?]) and found mens vests. He saw a fancy blue one and said “How ’bout this?” I asked if he wanted that fancy one or a plain one like the one we cant find? He wanted the blue one. That one. So I added it to the cart. He also wanted a white shirt. So I found one of those too. Ordered. Crisis averted for just under $50.00. Again… sheesh!

He calmed down a little bit after that. He was still pacing and almost tripping over his own feet. He sat next to me for a little while, 15-20 minutes, with his tablet. I think he was trying to hold on. It was unreasonably hot. It shouldn’t be 95° in April.

He’s in bed now. I ran his bath and he played for a few minutes, rinsed off mainly. Then jammies and bed. Just waiting for our grocery delivery now.

Another day for the books. We made it. Only a couple more days of heat to get through and the temperature will drop 10 degrees. Still too warm, but not ridiculously so.

I know we’re all having rough days and not so rough days. We just have to get through the day we’re in, even if it seems like it’s a week long.  We can do this. Together, supporting each other, we will get through each day. I couldn’t do it without all of you. I appreciate you and thank you for stopping by and sharing our adventures.