At 3:00 Daughter got up to use the bathroom. After her it was my turn. Might as well get the coffee going too. Everyone being up got Zeus riled in Ben’s room. He woke Ben up and the Bounce was accompanied by Zeus chasing Sophie Cat who clawed my knee on her way out the window. Well, Good Freakin Morning!

Ben cuddled up under the blankets. I dont think he was quite ready to wake up. Stupid Dog! Daughter remained completely oblivious to the mini-drama playing out on my bed since her door was closed and her AC was running.

At 4:30 Ben got up, got completely dressed and found a water gun, filled it up and started shooting me. I asked him to stop and was treated to a maniacal laugh. He kept shooting at me, thought it was hysterical. I got up. Obviously, I wasnt going to be able to relax anymore until his after his meds at the earliest… at least two more hours.

And so starts another morning at Casa Cuckoo. At least the sunrise was pretty

Kinda spoiled by the 7-11 sign, but I do live in a mixed use neighborhood.

Around 6:00 Ben was playing with his chalk, so I figured I could use the bathroom with the house burning down. About 10 minutes later I got a text from Daughter asking if I’d given him his meds yet. I told her no, it wasn’t 6:30 yet. Apparently he had gone and bounced her because he didn’t want to be alone for a few minutes. Anyway, she gave him his meds and he stayed in the living room with me until 7:00, when she officially took over.

Yay, back to bed. Except… Zeus, followed by Ben. Dang it! What’s the point of Daughter taking over in the living room if Ben is just going to follow me? 30 minutes of bedquaking exasperation followed. Then his meds finally slowed him down enough to be still. He just stopped, laid there for a few minutes, then jumped up and ran into the living room to play with his chalk. I swear, it’s like he was getting drowsy and was afraid he’d fall asleep and miss the Pony Party.

I dozed off at some point. I know I dozed because I was jerked out of that doze by a bedquake and very loud maniacal laughter. I was deep under though, so it took a few more minutes of that maniacal laughter to drag me to the surface. I don’t know what he was watching, but he thought it was funny. Or he thought he was supposed to think it was funny, because that laugher…  that wasn’t regular, joyful laughter. I should record it and use it for my alarm. NO way to sleep through that.

When I heard/felt Daughter come into the room and give him meds, I got one eye open enough to check the time. My regular alarm hadn’t gone off, or if it had, I didn’t hear it. Just as my eye was focusing the alarm started. Okay, 10:30. Unfortunately, my fumbly fingers hit snooze, so I got to hear the alarm twice.

It took me another 15 minutes to get off the bed. I was still wrapped in sleepy cobwebs, but my bladder was flashing warning signals, so I stumbled to the bathroom. From the bathroom I went directly to the coffee pot.

On the way I noticed Sven was under the hammock, pouting. There were berries in his bowl and greens too, although they didn’t look very crisp. I took pity on him and put him in the shower. Spoiled rotten…

Spoiled Yellow is what he is. I added a few chunks of green bell pepper to his fresh food. They were already cut up, so why not? 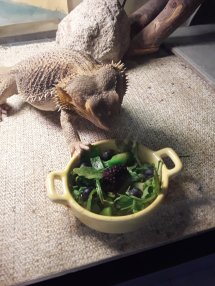 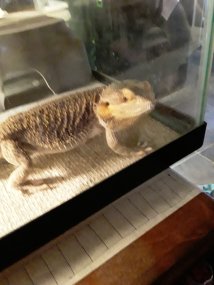 After the shower he went to his bowl, checked it out, noticed me there (tilted his head for serious side-eye stare), then ran to the Judgey Corner. What’s that about? I made him mad with the toothbrush in the shower and I made him mad taking his picture while he was trying to eat. I guess I won’t be getting a good review or a bonus.

Around 1:30 Daughter went to her room to charge her tablet and phone (both?!) and invited Ben to join her. He went. Wow! I took meds in at 2:15 and he was laying in bed, watching his tablet. Cool! I went back to my room.  About a half hour later he was banging on the bathroom door saying “Ben to go potty”. I hurried and got out so he could go. He usually waits until he’s about to explode before he realizes he needs to go.

After he was done he came and said “Gramma come living room” I guess it was my turn again. That’s fair. He’d been with Daughter most of the day. I plopped down on the couch, Zeus opted for the tile floor and Ben sat in front of the stove doing his thing with the chalk. What a huge difference from yesterday. It’s a little bit cooler today, and I mean a little bit. The Weather Guesser app showed 90°F (32°C) at 3:30, so 5 degrees F. That’s not that much. 90 and above is too hot, shoot… 85 and above is too hot IMO. Maybe yesterday was more about all the other stuff going on, or the barometric pressure rising? Whatever the reason, yesterday was NOT fun, today has been better.

It’s a good reminder… when we’re in the middle of seemingly EVERYTHING going wrong, another day waits, full of possibilities. It could be crap too. It might even be worse, but it’s only one day, one moment in the midst of many moments, and the next moment may be fantastic! One thing all of the trauma drama llama ding dong of my life has taught me is, the suckiest situations DO end. It’s hard to believe there will ever be light again when you’re stuck at 3am, but the sun does come up.

Okay, enough blathering philosophy and woo woo platitudes. It can be very annoying, I know.

At 4:00 Daughter came out and said “Tag”. Yay, back to horizontal time! She also informed me that we would NOT be doing Family Movie Night tonight. Ben was calm, seemingly content, we were just going to carry on with that vibe and keep things low key. Works for me.

“White chicken” is being cooked by Daughter for Ben’s dinner. It’s time to wind down and head towards bath and bedtime. Today was a good day.

No more blah blah blah, I’ll just leave you with a great classic song (and old video…gotta love the 80s), and the invitation to join me tomorrow here at Casa Cuckoo