4:00 wake up, but it was a call of nature. All was still quiet at Casa Cuckoo. I took care of business and went back to bed to wait for the Bounce.

I must have dozed because I was startled by the bedquake and ear sniffing before the actual Bounce happend a few seconds later. I felt around for my phone to check the time. Wow! There’s a first… it was 5:00. Ben cuddled up, then jumped up again and ran into the living room. He got back in bed and confirmed that the TV was on. All was well in Ben World. He settled down and watched his tablet and I messed around on my phone.

At 6:30 it was time for meds, so I got up and got them for him. I also uncovered Sven and turned his lights on. He was in his pouty corner, sleeping. He didn’t look pleased to be suddenly woken up. Poor Sven…

Daughter came down the hall around 7:00, headed toward the bathroom. Ben jumped up and followed her to the living room and then to her room.

He stayed with her until about 8:30 then he rejoined me long enough to command “Gramma come living room!” I said okay and finished typing the comment I was leaving. He stood in the doorway waiting for me. I told him I was coming… Sheesh!

We got in the living room and he demanded ear buds. I went and got the only pair I had…neon green with pink ear pieces (because Ben took the green ones off and lost them). He didnt want those, even after I showed him they work. He wanted the pink pair (broken last week) or the white pair (broken two days ago) or blue earbuds (never had blue ones). I told him that all I had was the green ones, if he didn’t like them, he needed to go ask Mommy.

He came into the living room and calmed himself down. Plugged in the black earbuds that Daughter had and ate some Doritos. I don’t know why Ben and Daughter butt heads so much, but they do. I used to try to intervene, now I just stay out of it, for the most part. They’ve got to figure it out for themselves. I will jump in if it looks like it’s headed down the Meltdown Highway. By 9:30 things at Casa Cuckoo were back to calm.

At 10:00 Daughter threw a load of clothes in the washer and came out to take over Living Room Duty. I asked if she was sure, we were doing okay. She said she was sure. Alrighty then, Horizontal Time for me.

About 45 minutes later I went to feed Sven. Today he got arugula, a canned grasshopper, and some pieces of strawberry. (I had to toss most of the package of strawberries. I don’t like someone else selecting my produce. Half the strawberries were yellow on top anyway. Grrr…) 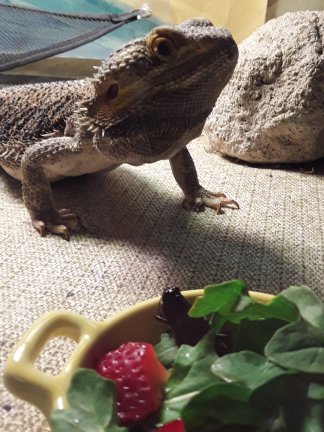 but getting The Stare, so I left.

Ben was back and forth between my room and the living room until after his noon Adderall. About 10-15 minutes after he took it, he jumped up out of my bed and headed for the living room. I heard the sound of his bucket of chalk being dumped on the floor. I knew that should keep him occupied for a while.

I decided that since Daughter didnt appear to be inclined to hang her clothes to dry in the sun, I would be making a trip across the street. I also figured that if I was gonna make the trip, I might as well wash my small load and take it too.

I noticed a new sign at the laundromat. “No Entry without face covering”. That’s the first I’ve seen. Of course, I haven’t been out much and I’m usually in my own little bubble of oblivion, so…

I decided to go next door to the 7-11 since I was right there. Daughter has been wanting sunflower seeds and the market has been out of the regular, unflavored kind. I grabbed a couple $0.99 bags for her and a couple bags of Doritos for Ben. Daughter told me I was “the best” when I gave them to her. I told her that I already knew that.

At 2:00 I put my mask back on to go get the clothes. Daughter realized the time and started getting Ben’s meds ready. Without looking at me she said “Bestest Mommy ever? Will you get cheesy bread and crazy bread while you’re out?” (Little Caesar’s and a taco shop are next to the market) I told her that of course I would. Sigh…

This was a time that I hated my lack of arm strength.  If I could carry more than 5 pounds, I would’ve walked. Driving from my house, to the Little Caesar’s parking lot, going inside to place the order (I knew they’d have to cook it) then trying to drive directly across 5 lanes of traffic to the laundromat parking lot to get my clothes… then the whole thing again in reverse order. Seriously, walking would’ve been easier. I can carry a heavy bag of groceries from my car in the driveway to the front door, but two mesh laundry baskets full of clothes across the street? Nope. Stupid nerve damage.

Younger Daughter called around 2:30 asking if they got any mail. They did get a package today, but I forgot to text her in between trips across the street. She stopped by about a half hour later, opened the box to show me a pair of quartz crystal earrings (huge things, her ears are gauged) took a couple of Ben’s juices and a package of Reese’s peanut butter cups. She didn’t bring any lemon bread though. What’s up with that?

Ben finished doing his chalk thing and came to hang out in my room. He was calm and relaxed until around 4:15. That’s when the switch flipped and Crack Thirty began. He started by playing Bongos on Zeus, then switched to hitting him in the face with the unicorn. Zeus got ahold of the unicorn every once in a while and they’d play tug. The problem was, Ben plays too rough. You’d think it would be the Big Dumb Shepherd mix dog that would be too rough. I must have said “Easy” and “Not so rough” and “Calm down a little bit” about 50 times each over the next hour. Wasted breath… it seems to bother me more than Zeus, because he just lays there. Maybe I should just ignore it?

Daughter started Ben’s dinner at 5:00. Steak tonight. The day’s adventures are coming to an end. Another pretty calm day. I was happy that whatever threat caused the arming of the Stuffies seems to have passed. Unicorn did lose a leg to Tug today. I’ll be performing reattachment surgery after bedtime.

I think I’ll leave you with this great song that Melanie posted today. I hope she doesn’t mind that I stole it from her

Have a great evening, and we’ll meet up here at Casa Cuckoo tomorrow. Life is an adventure, even during lockdown. We’ll have some laughs, or maybe share a few tears… whatever feel right.