Daughter’s BFF (since they were 12) showed up just as Ben was going to bed last night. She’s also Ben’s Godmother, so he was happy to see her. She had come for “Best Friend Date Night”. She and Daughter get together every month as their schedules allow and eat and watch a movie. Daughter made spaghetti with meat sauce. I have no idea what they watched.

I was awake until nearly midnight and the Bounce occurred at 2:45. Well, I can’t expect to sleep in until 6:30 AND take a nap every day, now can I?

Ben was full of ants in his pants, wiggle jiggle energy. I gave him my tablet because I didn’t want to get up and get his. I dozed a little, but mostly I was trying to stay ON the bed. Bed had wiggle jiggle nudged me to the last 6 inches. I have a California King size bed. It’s as big as two single beds, but Ben insists on cuddling (which I like) and nudging (which I don’t like) until I’m hanging on for dear life.

At 4:45 he jumped up and ran out, yelling “Gramma come living room now!” over his shoulder. He was having another potty emergency, but wanted to keep me in sight. Between Ben and Zeus, I’m very well looked after.

I was couch sittin by 5:00, waiting for 6:30 meds time. Ben had my tablet and a couple of his Kittys  and was saying  “Get the kitty” over and over. I wanted to yell “Enough already!”, but I didn’t. Bonus points for me & my patience.

I think I’ve written before about how we’re attempting to teach Ben manners. Things like Please and Thank you. We’re also trying to get him to say “excuse me” when he burps or has “rumble booty”.

So this morning we’re sitting on the couch and he lets one rip. I didn’t say anything, not ignoring… waiting. He says “Gramma?” I say “Yes, Ben?” He says “rumble booty”… sigh… so I said “What do you say?” then he said “excuse me”. It’s a game now or a script. He knows what to say and when to say it, but he won’t (or maybe can’t, maybe his autism won’t let him say it without the scripting game?) Just once, I’d like for him to excuse himself without the prompting.

Meds were given, Sven was uncovered and his lights turned on.  I was surprised that I woke him up. All the noise and commotion appeared not to have bothered him. Even Zeus barking at and chasing his  own tail didn’t bother Sven.

Around 7:15 Daughter got up. After a trip to the bathroom, she asked Ben if he wanted to go to her room. She helped him gather his stuff, and off they went. I got more coffee headed to Horizontal Time.

I dozed, I read articles and posts, I dozed some more… just me and Zeus, hangin’ out on my bed. I could get used to this!

The 10:30 meds alarm went off and I went to see if Daughter had taken the meds box to her room or if I should get them ready. It wasn’t in the usual spot, so she had it. I stopped and checked on Sven, he was on his rock, looking very unhappy. Shower Time!

I noticed today that the underside of his tail is peeling. Poor Sven… this shed just keeps going and going…

I told him I would leave him alone to eat in peace. 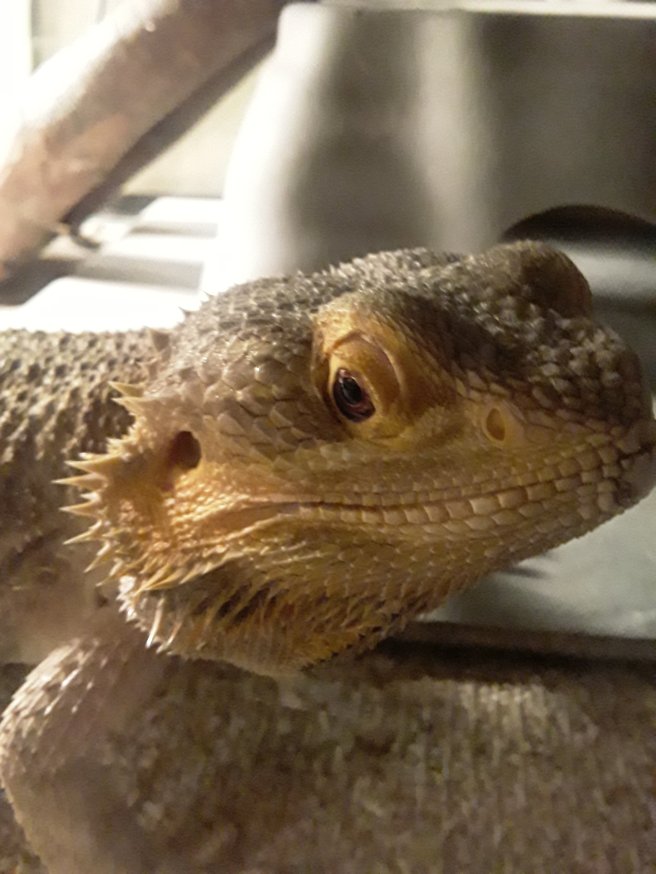 Around 12:30 I heard Ben tell Daughter that he wanted to go to the living room. They both headed that way, but Ben decided he had been negligent in the Bouncing and bedquakes area, and decided to rectify that oversight. Yes, in plain english, he jumped onto my bed, ran off, jumped back onto my bed, tried to push Zeus off the bed with his feet, ran off and so forth and so on. Dang ditty dang dang dang!

I guess that little burst of energy set things right, because after 30 minutes or so of bedquakes, Ben went out into the Air Conditioned living room and did his chalk thing. He was still doing it at 2:00 when it was time for more meds.

If it wasn’t for the 2:45am wake up and the afternoon bedquakes, I’d start exploring that alternate universe idea again. It was just so completely bizarro for me to have all this down time. I’m not complaining, I could seriously get used to this.

At 3:30 Younger Daughter stopped by to bring another can of grasshoppers for Sven and some money for me. We pay for her phone and car insurance so I ask her to give me money to cover it. When she wasn’t working, I didn’t charge her, and she owes way more than she pays, but it’s the principal of it. If she’s gonna adult, then she needs to pay her bills.

Older Daughter got her knickers in a twist over Younger taking 3 juices when she left. Younger always grabs a soda or a juice when she stops by. It’s not like she takes the last juice or even leaves us short, she wouldn’t do that to Ben. The petty nonsense between my daughters is so annoying. It’s like they’re stuck at ages 10 and 4, instead of 31 and 25.

Things took kind of a turn from there. Ben was happy doing his chalk thing, but he was doing it in front of the bathroom. When I went to use the bathroom, Zeus tried to follow as usual and got in Ben’s way, messed things up. I hurried so I could take Zeus back to the bedroom.

Daughter dozed a little on the couch and Ben came to take a break and eat Oreos on my bed. I decided to brush his hair while he was watching his tablet. I guess the noise of Ben yelling woke Daughter up. She was grumpy!

Ben asked me to go to the living room. I told him Mommy was just in the bathroom. When she got out, she started cooking his steak and washing dishes. She was putting off  serious bad vibes. It almost made me cry it was so uncomfortable. Ben kept telling me to sit on the couch with him. I did sit with him and tried to keep my emotions neutral. It had been a mellow day, I didn’t want drama right before his bedtime.

I told Daughter that whatever I did or didn’t do that pissed her off, I was sorry. She said it wasn’t me, she “might as well be dead” because Ben always wants Gramma. I told her it was the same as her preferring her father when she was little. She said she didn’t remember that. (I guess since she doesn’t remember, it’s not valid??)

She was just grumpy and it was like a poison running through the house. I sat with Ben while he ate, and put him in the bathtub.

And that’s where he is now… I’m going to end here. I need to keep neutralizing until Ben is in bed. Then I have to put on public clothes, a mask and SHOES to go to the pharmacy/grocery. Two more prescriptions are ready and there are 3 or 4 things on the running list we keep by the fridge.

Thanks for hanging out while I did pretty much nothing all day. Things got weird at the end, but they do that sometimes. Life is unpredictable and people are even more so.

Come by tomorrow, it’s a full moon tonight so my excursion in public should prove interesting. Maybe. Or maybe it will be boring. We just never know…