I survived my trip to the pharmacy/grocery store last night… (Severus Snape voice) Obviously. The pharmacy had one of Ben’s meds but not the other. I asked why not the other? The Pharmacist, a very nice lady, but slower than molasses in January, clicked away at the computer and said she’d get it ready. Cool! I had a small list to scavenger hunt for anyway.

I found all the things on my list. Not necessarily the usual size or brand, but none of the differences were on Ben items, so it was all good. I paid for my food stuff, went back to the pharmacy to get Ben’s other med and headed to the bank to deposit some cash.

Older Daughter’s Credit Union and my bank won’t/don’t link up, so I have to get cash from her account and deposit it in my bank to pay some of my bills. My entire SSDI check every month covers rent with about $5 left over.

Cash deposited, then on to Panda Express to pick up the order Daughter had placed. I’m glad she ordered ahead because their procedure is wait in line, go in and order, go back outside to wait, come in & pay, get food. I just stood off to the side and the gal brought me in and gave me my bag. Much easier. And a beautiful sunset when I got home 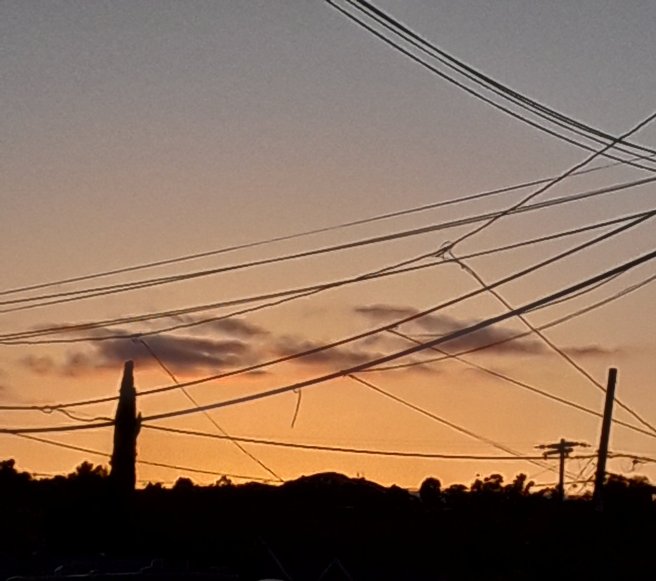 I carried the bags into the house and helped Daughter put the stuff away, then went to change out of my Public clothes, and back into my comfys (it’s a word. I made it up myself). I was a little surprised to see what appeared to be a dead Diesel Cat on my bed

This morning’s Bounce was preceded by a Zeus Bedquake and ear sniffing. Wow, they usually arrive together. Odd… Even odder was the amount of light my squinty, crossed eyes could perceive. I felt for my phone as Ben got under the blankets and cuddled up to my warmth. By the time I found my phone, and exited out of the game I’d been playing when the Restoril flipped my OFF switch, it was 6:02. Whuh-Whaaa? I blinked a few times, trying to focus my eyes, and checked again. Still sixish. Amazing!

Ben didn’t cuddle for long, and he was very gassy this morning. It reminded me of being married. Soon it was “Gramma come living room!” and off we went.

OH! I forgot to mention yesterday that Ben switched the movie in the DVD player. No more Avatar, now we are watching Big Eyes on repeat, of course

We took turns in the bathroom, him first of course, and I uncovered Sven and lit him up. I got the 6:30 meds ready and gave them to Ben, then got myself settled on the couch. Then had to get back up because I forgot my coffee, dangit.

Resettled, I went through my email and WP. Ben couldn’t decide if he wanted to do chalk, play with his mini Barber Chair setup, or sit on the couch under a blanket. He rotated through all three until 7:15ish, then settled on the couch. Zeus wanted to play, so he found and brought his unicorn (what is left of it) to me. I played tug with him and threw it for him to fetch until he was happy to lay and chew on it.

Daughter stumbled out around 8:00. I told her I was starting to think I needed to see if she’d run away from home or been abducted by aliens in the night. She said a phone call from the hospital woke her up. I asked if that meant she’d still be konked out if not for the phone? She just gave me a LOOK. She hasn’t perfected it yet, so it didn’t have any effect on me.

I gave the Morning Report and went to my room, preceded by Zeus and followed by Ben. Daughter attempted to do all the paperwork for the new job and set up an appointment for her physical and drug test.

Ben left for the living room around 10:00. Other than putting a load of clothes in the washer at 11:15 or so and another around noon, I pretty much just chilled on my bed, Horizontal Style.

Younger called to tell me she’d had an interview at a Dispensary and it went really well. They didn’t come out and offer her the job, but asked when she’d be available to start. She’s been doing child care, but it’s uncertain and not really enough money. Also, it’s not what she wants to do with her life.

Ben made his Mama cook him some bacon around noon.  She was NOT happy about it, but she did it. She asked me to give him his noon Adderall. I wasn’t about to say anything med related after yesterday.

Every time I was in the living room/bathroom/kitchen area (I really think that area was a studio and the 3 bedrooms were added later) I looked in at Sven. He didn’t move. I guess he was having a chill, horizontal day too.

Around 2:00 I put on my Public clothes and my mask and took the clothes across the street to the dryer. Daughter has a friend coming to get her around 3:30 to take her to her BFF’s house to print out and fax all the paperwork for her new job. She plans to be gone about 3 hours. Why the B.S.?? She could use the printer and fax machine at her current work anytime during the next 4 nights. If she wants to hang out with her friends, she should just say so.

When I got back from putting the clothes in the dryer, Ben came into my room and said “You have to get dressed. You have to go to the store.” Why? What? Please, No! Not when his Mama is planning to leave. I really don’t wanna try to handle a meltdown by myself. I gave him a police truck from the stash. He had asked for a new police car last night and I picked it up at the grocery store, surprised that they even had one. That wasn’t good enough. He wanted A. New. Sweeney. Todd. Barber. Chair. Toy! I tried, once again, to explain that they don’t make them. I listed off the 4 Barber Chairs that I’ve made for him. Not good enough. I then pulled out a bag of small gears that I had ordered a long time ago. He looked at them and played with them for a minute then pushed them away.

I went to get more coffee, knowing he would follow me, which he did. I thought maybe being out where the chairs were at would get him interested in playing with what he had. I saw that the newest one, the actual chair, had an armrest hanging. I got the tape and fixed it. He had grabbed my tablet and was watching it as he went into the bathroom. He came out holding it up saying “Is this what you’re looking for?” (The way he says it sounds like a line from a movie – scripting) I told him it was okay to use my tablet, but that he was supposed to ask first. Ask before touching something that doesn’t belong to you, that’s the rule. He went into my room with it and got on my bed. I went and laid down too, hoping I could who-doo voodoo him with some Zen vibes.

I was kinda worried when it was time to go pick up the clothes. I told Ben that I was going to the dryers to get our clothes and I’d be right back, to wait for me and no stealing Gramma’s spot! (it’s a game. He sits in your spot and in a silly voice you make him, and every object within his reach, get out of your spot.) I hurried.

Daughter had canceled on going to BFF’s. She told me she could just do the stuff at work. Really? I had no idea. (Too much sarcasm?) Anyway, he was playing in my room when I got home. I folded and put away my clothes and his that were mixed in with mine. Ben kept on playing.

I think my who-doo voodoo Zen waves washed away some of his tension or whatever. He had been hanging out with his Mama most of the day, and she is pretty high strung. She’s worrying about stuff that could, possibly go wrong. Like what if her current job won’t give her an accounting of her “in-service” hours (continued education, needed for her renewal). I don’t think she was very happy when I told her it sounded like a waste of time and energy to worry about something like that. She grunted something and went back to watching her tablet and playing a game on her phone.

It’s getting close to Ben’s dinner time. I’m hoping we get through the rest of the evening without any incidents. The next couple of days are supposed to be warmer, fewer clouds, I think the pressure is going up. Higher barometric pressure seems to make Ben more irritable. I’ll be projecting Zen waves. I’ll be tired, drained. But, I’d rather I was feeling a little drained than deal with an overloaded Ben.

I’m going to end today’s adventures here, so I can focus on getting Ben through until bedtime. We’re keeping an eye on Sven. He’s been in his Pouting Corner all day. Maybe a mood, maybe a tummy ache, we’ll put him in the shower tomorrow and see if that perks him up.

Thanks for joining our adventures and hanging out with us! I appreciate all the support you give me, I really do! Come on back tomorrow. You just never know what’s going to happen here at Casa Cuckoo.

Today’s song is for laughs. A Holderness Family parody song.