The Bounce this morning was before 5:00. I’m not sure what time exactly, I was deeper in my sleep and it was harder for me to surface. Ben was very much awake. He Bounced me and demanded my presence in the living room immediately. No cuddles, no Rumble Booty, just bedquakes and demands. Funnily enough, that reminds me of being married too.

I must’ve dozed back off because there was a second Bounce and a louder command. I dragged myself out of bed and stumbled toward the couch. As I got into the area, Ben said “I did it! Ta Da!” What he had done is uncover Sven and turned his lights on. It was 5:15. I started to explain that it was too early, then stopped. Why waste my breath? It didn’t hurt Sven to have “sunrise” occur an hour early.

I settled on the couch and watched Ben pacing, bebopping, and generally expelling more energy over the next hour than I have all day. My eyes wouldn’t stay open or focus. I fell asleep reading an ebook last night. Reading! I’ve been unable to concentrate on a book for months, since before C-19. My “reader’s block” is finally broken!

Morning meds were given and I waited for the chill to descend. Zeus was full of energy and wanting to play also. He and Ben actually managed to play together for a little while. I know, I was surprised too.

Daughter arrived a little after 7:00, with Zeus barking at her. He’s been barking at everything. I’m not a fan of barky dogs and he needs to stop it. Daughter said everyone at work knew she’s leaving, even though she’d left the resignation letter the previous night. Word travels fast through the employee rumor mill. She invited Ben to her room and he followed. I was just a few steps behind them, headed to my bed and hopefully more sleep.

At 8:30 I got my third Bounce, bedquake and command of “Gramma come living room!” Sigh… My eyes hadn’t uncrossed with the additional bit of sleep.

Ben played with this and that, watched his tablet, did the chalk thing. He was singing one of my favorite songs

Everyone was feeling chill! 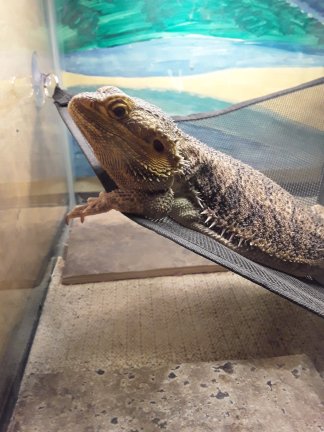 Sven at 6am and at 11am, settling lower on his hammock.

The 10:30 meds and the noon Adderall were the only markers in a relaxed morning. The weather was even cooperating. The temperature was 75F (24C) with a nice breeze.

Around 1:00 it was getting warm so I switched the AC on. Sven got off his hammock and went to his Pouting Corner. I turned on the heat coil since the AC blows right at his terrarium, and got him some fresh nom noms. Ben decided to take a break from his chalk, so he grabbed some popcorn and got on couch with his tablet.

Daughter stumbled out to use the bathroom a little after 2:00, just as Ben went in there. I told Ben to hurry. He came out trying to pull his underwear up with one hand while holding his tablet with the other. Comic relief at Casa Cuckoo. After Daughter was done in the potty, she went and got her stuff, and came back to take over. I was definitely ready for some Horizontal Time! Ben was doing his chalk thing again.

After Daughter got settled, Ben went a little SpazmaTaz. He was in his room, jumping up and down on the floor. He was making things in my room rattle. We share a wall and the stupid, raised, hollow floor. I’m really afraid he’s going to jump one time and go straight through the floor. He does the jumping because of Peppa Pig… grrr…

He stopped doing that (after I yelled at him to stop), but decided to play with his Barber Chairs. Oh, and cover his face and arms with red marker. OY! I’m very glad I put the Sharpies away and he only has access to washable markers.

“Crack O’Clock” continued after the time his 2:00 meds should’ve started bringing a little chill. His med doctor did say that Adderall and other ADHD meds can cause a “rebound” of extra hyperactivity when they wear off. So rebound plus high pressure equals SpazmaTaz. (it will be on the test)

5:30 and Ben has had his meds and is getting ready to eat his steak. Bedtime is just around the corner. Today was better. The energy was still high and sometimes intense, but the edginess wasn’t there. The tension wasn’t there. I didn’t feel as anxious.

Thank you for hanging out with us. We weren’t especially entertaining today, but I like it when we can just sit back and relax too. It’s supposed to start cooling down now. Pressure dropping will be great.

I shared this song with a dear friend recently and now I’m sharing it with all of my dudes!

Did you know that Alanis is a Highly Sensitive Person (HSP) just like many of us? I can write more about HSPs and Empaths if anyone is interested. I’m not an expert, just a member of both groups.