(I accidentally deleted the usual beginning part…nodded off with the phone in my hands… I’m just gonna leave it this way.)

Today’s Bounce was at a more reasonable hour, 5:00. Still too early IMO, but more reasonable than 2:30. Unfortunately, I was awake later than planned last night because I was texting with Younger Daughter. She’s been having relationship problems again (still), and that job she interviewed for hasn’t gotten back to her or responded to her messages.

Anyway, at the command of HRH, I was seated on the couch by 5:10. I tried to get my eyes to focus, email, WP, etc and Ben watched his tablet and played with Zeus. Meds at 6:30, regular Casa Cuckoo stuff.

Daughter got up at 7:00, went to the bathroom and asked Ben on her way out if he wanted to come to her room. He went with her so I, followed by my shadow, Zeus, went to my room. I got comfy and realized that I hadn’t uncovered Sven. Dang it! I got back up, fixed my oversight and went back to bed.

I planned to catch up on WP since I’d only gone through my comments and read one or two posts. It was while I was writing about texting with Younger last night that I nodded off. I wasn’t planning to sleep, but my body demands it sometimes and that’s when I start feeling like I’ve developed narcolepsy.

A second Bounce and bedquake at 9:30 announced Ben’s entrance to my room. I was awake-ish anyway so it was fine. I felt better for the extra sleep, but also like I’d wasted time. Time that could be spent doing other things that needed doing. I banished that thought. I obviously needed the sleep or I wouldn’t have konked out in the middle of writing.

Around 10:15 I put a load of laundry in the washer, and at 11:00 I put the 2nd load in. I planned to take them over to the dryers across the street. Supporting small businesses and laziness. Daughter had given Ben his mid-morning meds and ordered a delivery from the Golden Arches. A red and yellow box for Ben with another cute toy. The troll toys are adorable, I might adopt them for my own. Ben doesn’t seem to care, but of course I’ll ask first.

When the washer was done I put Mr Grumpy Face Dragon in the shower. I think he liked it. What do you think? 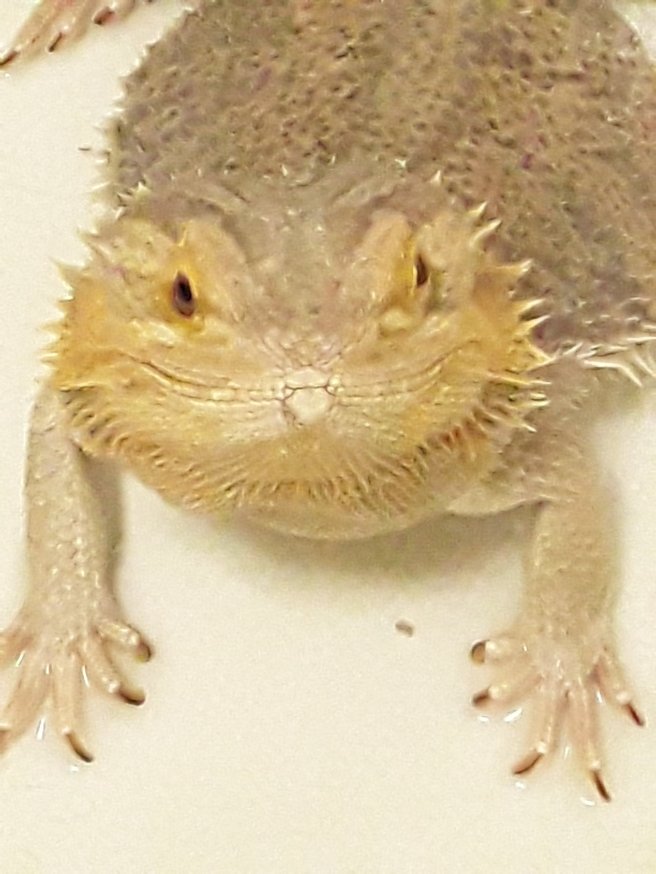 I didn’t add a filter or change anything except the “lighting” setting. This is a LOT closer to how bright yellow he actually gets.

Around 12:30 I took the clothes across the street to the laundromat dryers, then headed to Rite Aid. Ever since Older was sick in December she’s had a cough. They brought it up during her physical yesterday. She had a chest x-ray in December and got the all clear, but coughing gets you dirty looks these days. Anyway, she wanted an expectorant and some cough drops. She also wanted some wine. I masked up and braved The Public. While I was standing in line, six feet behind the person ahead of me, I saw a jumbo pack of Charmin TP. Of course I grabbed it. TP is on my shopping list by the fridge, with dog food and sour cream.

I brought my treasure home and relaxed for about 20 minutes. Then it was time to go pick up the clothes. I put my mask back on and headed out, got the clothes, brought them home and folded them and put them away. Daughter had gotten Sven out of the shower and put him on his hammock.

At 2:15 Daughter got in the shower so Ben commanded me to the living room. Then he went and sat in the bathroom watching her take a shower. Why was I in the living room again??

A dilemma occurred when Ben decided to take a picture with his tablet of Daughter in the shower. (I immediately deleted it) How to explain that it’s not okay to take pictures of people showering or otherwise unclothed without making nudity seem bad? I settled on “We don’t take pictures of people in the bathroom, using the toilet or bathing. Those are private things.”

Daughter went to her room. Ben had me do some repairs to one of the Barber Chairs, then we settled down on the couch. We spent the rest of the afternoon just hanging out, playing a little, talking or singing or scripting a little. It was pretty chill.

Younger called around 5:00 and Zeus, recognizing her ringtone went to the door. I told her that her delivery hadn’t come yet. She and Partner were going to go get Pho and check with me afterwards.

Older Daughter came stumbling out of her room right after the phone call, apologizing and asking why Zeus and Ben were focused on the door, so I explained. She took over Living Room Duty and I went to my room. Ben followed me, so I told him “Mommy got up to spend time with you, Ben. It’s okay to come to Grandma’s room, but you should hang out with your Mommy too.” I guess I was boring or he understood that Daughter wanted him to be with her, either way he went to the living room. Zeus stayed with me.

Ben is still eating on the chicken nuggets that Daughter ordered earlier, so no cooking tonight. Only meds and bathtime remain. Looks like it’s time for a song and a See ya tomorrow, Dude.

Let’s dance out tonight, shall we? A Waltz written by Sir Anthony Hopkins

Thanks for sharing another chill day with us. I had a little burst of energy mid-day but the rest was very relaxing.

This IS Casa Cuckoo so anything could happen at any time, so come back tomorrow, we’ll be waiting to share our adventures with you. Keep dancing!