I woke up a little after 3:00 on my own. Insomnia is such a swell Frienemy… I goofed around on my phone until I felt sleepy again, then drifted back to Dreamland.

Around 5:30 the bedquake and ear sniffing came, followed by The Bounce and a frantic motion of blankets accompanying another bedquake. He wanted me to go to the living room right away, but I told him “…in a little while, Babylove.” so he cuddled for a few minutes. He jumped up on his own (potty emergency?), then came back to give me a third bedquake. We cuddled until the alarm went off for his meds. Stupid alarm!

I got up, uncovered Sven and got Ben’s meds. He had the blankets pulled over his head when I came in to dope his face. I pulled the blanket down, gave him the meds and he followed me back to the living room. I covered him with a couch throw and got his tablet. Then I got my stuff and settled next to him. We sang What A Wonderful World quietly together.

Zeus wanted to play. He found his unicorn (what’s left of it) and brought it to us to play tug. Zeus was getting too excited and playing too rough, so we stopped tugging. He continued shaking and tossing the poor dismembered, de-fluffed thing, all while wagging his tail and knocking stuff off or over. Big Dumb Goofy Dog…

Daughter got home just before 7:00. She told me about her shift and explained that she might want me to drive her (and Ben, obviously) over to have her TB Test read around 1:30 today, or if Ben’s having a rough time (or she’s lazy), we’ll go first thing tomorrow morning.

Zeus and I went to my room for more Horizontal Time. I was determined to stay awake. It’s good that I did because my fourth bedquake came at 7:50, accompanied by “Gramma come living room!”, so off we went.

We just chilled on the couch, he with his tablet, I with my phone. Sometimes talking or singing What A Wonderful World… Nice!

At 10:30 the alarm reminded me to give meds. I also got Sven’s nom noms ready. No shower today. 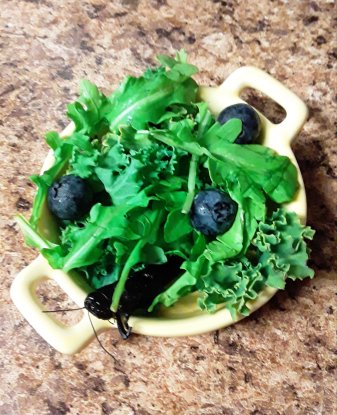 At 11:15 Ben decided he wanted Taters. When the King wants Taters, the peasant Gramma cooks Taters… the last three potatoes at Casa Cuckoo.

HRH supervised for a few minutes, then decided to do his chalk thang. I gave him his noon Adderall and the cooled off Taters, but he was too busy doing the thang with the chalk. Sven hadn’t moved either. Alrighty then…

It was starting to get warm. The temperature was forecasted, sorry guessed to be in the low 80sF (27-29C) today, so I closed all the windows and switched on the AC for the front room. Since Ben isn’t great at recognizing when he’s too hot, I need to keep him cool.

Younger Daughter called me to tell me that the mother of a childhood friend had passed away yesterday. The woman had cancer, so it wasn’t sudden or unexpected, but it IS sad. She also wanted to talk about how she somehow misplaced or lost $200 last night. She had come to get the rug that was delivered and given me $100 toward her cellphone bill and car insurance. She wanted me to double check how much she’d given me. Then we just chatted about all kinds of stuff until Older got up at 1:15.

Older decided that since Ben was super involved with his chalk and in a good mood, we should wait, give him his 2:00 meds and leave at 2:15, give his meds a chance to kick in before we came home. Coming back home is always the iffy part. So that’s what we did.

We dropped Daughter at the entrance and made two laps around the parking lot while she had her arm looked at, then we drove home and came back in the house. No problems. I was thinking it was good for Ben to see random people wearing face masks too. He notices things, so that will be in his mind. Who knows if the school will try to make the kids wear masks whenever they decide to reopen? Lately when he asks about school, I’ve told him it’s closed because a lot of people are sick and his school doesn’t want him or his friends or teachers to get sick. He takes it in, but doesn’t respond.

I happened to glance at Sven on my way to the bathroom. He was still in the same spot, hadn’t eaten anything, but I think he wants to fly away

either that, or he’s got vertigo and is trying to hang on.

At 3:30 Ben came to hang out with me in my room. He watched his tablet, sang a little and I fought off the drowsy feeling that kept trying to suck me under. He got up once and went outside for a little while. When he came back in he said “You have to get dressed, you have to go to the store.” I asked him what was wrong, he just repeated that troublesome phrase. Then he stuck his head out my window, looking toward the back gate. I told him to pull his head back in before the window fell and hurt him, and asked if he’d been messing with the gate. He didn’t say anything, so that’s probably a yes. I’ll deal with it after he goes to bed.

He ran out to the living room for a few minutes, then came back to hang out with me some more. Dinnertime is approaching, followed by bath and bedtime. We’ve reached the homestretch once again. It’s been another chill day.

Sven gave me the idea for tonight’s song.

Thanks for relaxing with us today. I hope you caught some of the Zen Waves and rode them like a champion surfer. Getting through each day and the varied circumstances is easier with support from caring people. I hope I’ve helped you all at least a fraction as much as you’ve helped me. See ya tomorrow, Dudes!