I was awake until after midnight again. I keep getting a second wind at night and it’s not helping my sleep problems. Sigh…

Today’s Bounce and bedquake was in the neighborhood of 3:30. I don’t know exactly, I was just assessing whether I was obligated to go to the living room. I told Ben it was too early, but he wasn’t liking that answer. I lightly dozed in between requests to open juice and bedquakes as he got in and out of bed a few times.

The 6:30 alarm told me to do meds and uncover Sven. I discovered that Daughter forgot to fill the little compartments in the pill holder, so I had to actually read the bottles to figure out how much he takes in the first dose. I usually just tip the contents of the appropriate compartment into the grinder. Ugh! Poor brain… And Sven woke up hungry. He ate the two blueberries left over from yesterday, but the arugula was dried out. I dumped it and got him some fresh food.

After meds Ben went to do his chalk thang. He’d already given me another “drum” performance earlier. No cymbals this time.

Daughter got home at the usual time, we did the usual things. She asked Ben if he was coming to her room and he kept saying yes, but wasn’t picking up his chalk. She went ahead to her room. I was still very tired, so I started picking the chalk up for him. I wanted to lay back down. I got it all picked up and he headed to Daughter’s room and I headed to mine. Sweet Horizontal Time!

I dozed and dreamt of a man I had known before (in the dreamstory, I didnt recognize him) but hadn’t known well or spoken to much. In the dream we talked a lot and he confessed to always being interested in me. We set up a future date. I even remember his name. Bizarro! I never have dreams like this. I’m not much on that kind of fantasy, it’s just not me. I’m not against the idea… just… odd.

I woke up a little after 9:00 and heard Daughter and Ben. He was “drumming” and she was getting irritated. I figured he’d come and get me soon. I wound up going and getting him around 9:45. Daughter kept telling him she was going to sleep, to be quiet and he was ignoring her. I grabbed his chalk (still in the bucket, YAY!) and off to the living room we went.

Ben was scripting from two different things and mishmashmoshing them together. Peppa Pig and Willy Wonka… interesting. I kept up pretty well, I think. Soon it was 10:30 and time for meds.

Ben had been using his “angry” voice since we’d come from Daughter’s room. He wasn’t saying angry things, just scripting in the angry voice. He felt edgy to me too (I’m working on the HSP/Empath post. I haven’t forgotten). I asked why he was using the angry voice, was he angry? Did something hurt? Was he hungry? Unfortunately he wasn’t able to give me an answer.

Around 11:00 or a little after, he went to go do the chalk thang. He’d settled down after taking his meds and watching his tablet. Thank goodness! And Thanks to the Angel who sent good vibes our way!

Noon Adderall was given while he was doing his thang. Sven was either Judging me or staring outside through the open window 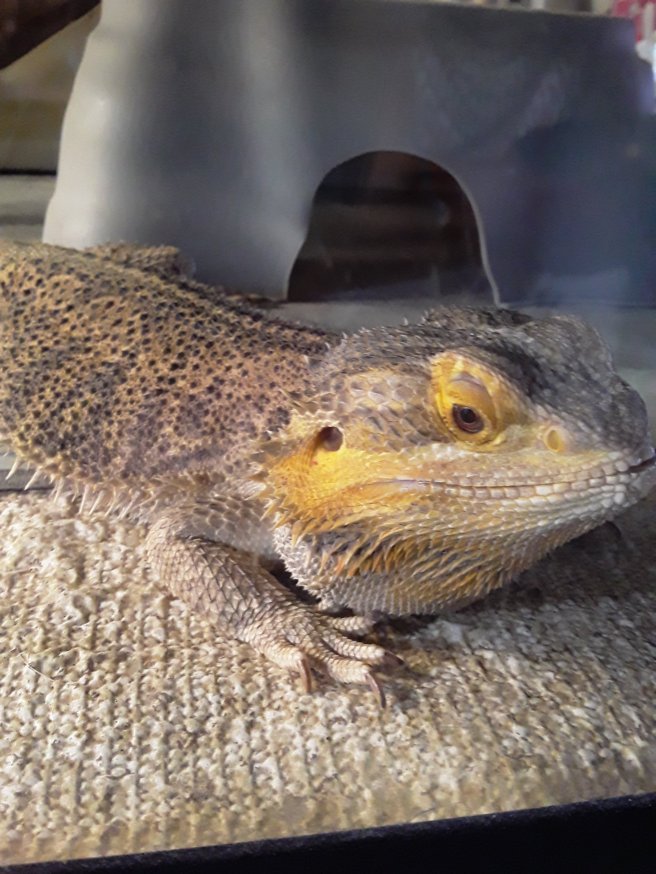 Ben continued to do his chalk thang while singing, grunting and making Happy Noises. I did the usual WP, Email, games, and texted with Younger Daughter. She was planning on stopping by to pick up another package.

I didn’t get her text that she was on the way. I only knew she was here when she knocked on the door as I was looking at the text messages she’d sent. I was playing a game and sometimes my texts don’t come through. It’s very annoying (maybe I’ll Peeve about it Monday, try out the new editor…hmmmm…)

When she knocked I was in the middle of texting her back, so I erased that, told her to hold on, went and got the key. (keyed deadbolt lock, to keep Ben from opening the front door… until he figured out the kicking it enough times will jiggle the lock open.) She had my delivery, 40 pound bag of dog food, so she brought that in, I gave her box to her, we hugged, exchanged “I love you!”s and she left.

Older Daughter got up and came out a little bit after… around 2:30. Ben had moved from his chalk to the couch to watch his tablet. I gave Daughter my report and headed to my room, with Zeus following.

Ben stayed with Daughter for a little while, but he wound up coming to my room. He was chill, watching his tablet, occasionally asking me to open a juice. Sometimes singing or drumming.

Thank you for spending another day, doing a whole lot of nothing, at the Casa today. It’s awesome to have your support when things are bumpy, but it’s also nice to chillax with friends. Meet us in the living room tomorrow, just before sunrise. I’ll have the coffee waiting.